Julian Waumsley, of Aquilar, explains how the installation of cable-based external leak detection systems can find fuel leaks beneath the surface of airport paving. 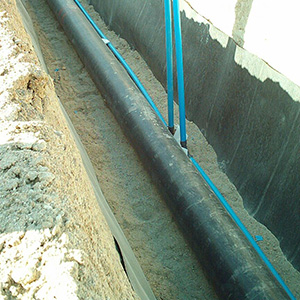 The huge weight of a modern airliner means that the concrete used in today’s airport runways, taxiways and aprons is almost twice as thick as that needed in years gone by. So consider the cost to the airport and the associated environmental consequences of having to dig up large areas of taxiways and apron to locate a leaking fuel pipe. Many airports have aviation fuel pipes running beneath their surface, as it is the most convenient system of transporting liquid. However, if one of these pipes were to suffer from a leak at your airport, would you be able to find it? If an airport does not have the necessary means to detect fuel leaks then very expensive taxiways and aprons may have to be excavated to access the pipes.

The key is being able to pinpoint exactly where a leak is located. The solution is to install cable based external leak detection in the backfill with the hydrant piping. The TraceTek leak detection cable was developed for this very purpose, manufactured by Tyco Thermal Controls LLC and distributed in the UK by Aquilar. The cable contains a hydrocarbon scavenger material and is installed within a slotted PVC conduit. Traces of any fuel spilled are drawn into the conduit by capillary action, which makes it possible to initiate leak detection and location.

The system requires that a small amount of liquid fuel comes into contact with the cable, from that moment it takes approximately one hour for the leak alarm to be triggered. The monitoring system can report the leak and identify the location where the fuel was detected, typically within +/- 3 feet (1m).

If a leak has been detected, the ‘pull boxes’ (access holes situated alongside the cable) and connectors allow the system to be inspected in small sections. In most leak detection situations (where no cable system is fitted), the airport maintenance team will insist on verifying that the leak is real before digging up taxiways and aprons. Having the ability to inspect a section of cable is a valuable extra benefit.

It is very clear that detecting leaks quickly and accurately is of paramount importance. In Aquilar’s opinion, many airports, and many fuel transporters, are still using expensive systems that are unable to detect leaks within the situations that they are employed to operate. They will tell you if a leak has occurred but not where it is. And if testing is done on an infrequent, basis, it may be that weeks or months pass by before a leak is detected.

The potential costs are astronomical if the leak remains undetected and un-located for any length of time. Initially finding the source of a leak, exposing the damaged pipe for repair, plus costs attributable to repaving and the disruption to normal fuelling operations have to be paid for. Depending on the local regulatory environment, further environmental mitigation costs may be required and this can often exceed that of the initial repairs.

As well as the cost there are the dangers of contamination to the earth beneath the runway. Even a small crack or pinhole corrosion problems will eventually lead to the accumulation of large quantities of spilled fuel. The leakage will either spread to the perimeter of the paved areas or seep into adjacent drainage systems or natural waterways.

The cable-based leak detection system was recently installed at Madrid Airport to ensure rapid detection of leaking fuel despite local ground water conditions, which could in other circumstances make leak detection more difficult.